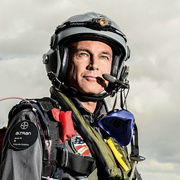 Bertrand Piccard is a pioneering aviator who has dedicated his life to achieving world firsts in aviation.

He started out flying hang gliders and microlights in the 1970s, and was European hang-gliding aerobatics champion in 1985. Later, he learned how to fly balloons, aeroplanes and gliders too.

In 1999, he and fellow pilot Brian Jones became the first people to complete a non-stop balloon flight around the globe. The balloon was called Breitling Orbiter 3.

The pair launched on 1 March 1999, from Château d'Oex in Switzerland. In cooperation with a team of meteorologists on the ground, they then used the high altitude jet stream to fly around the world in 19 days, 21hrs 47mins, finally landing in Egypt.

In recognition of this accomplishment, Piccard was awarded the FAI Gold Air Medal.

Four years later Piccard launched a new project – an attempt to fly around the world in a solar-powered plane. The first test flights of Solar Impulse took place in 2008.

Eight years later, he and co-pilot André Borschberg successfully completed their mission when they landed Solar Impulse 2 for the final time on 26 July 2016. The voyage consisted of multiple stages, with each stage being piloted by either Borschberg of Piccard.

Piccard comes from a long line of pioneering adventurers. His grandfather Auguste Piccard was a balloonist and his father Jacques Piccard was an undersea explorer. He is married, with three children.